July 12, 2015- A U.S. Forest Service fire truck accident took place in Fresno County, on Sunday.  The SUV collision led to six people hurt, near Clovis, at about 7:30 AM.

Maria E. Constable, 53, of Fresno, was reported to have been driving her Kia Sorrento Sport Utility Vehicle on Highway 168.  She said she was trying to merge and passed the Forest Service fire truck on the right side of the vehicle. 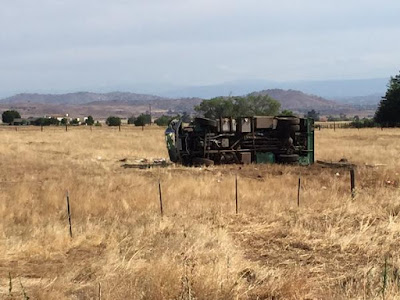 The SUV sideswiped the other vehicle, and the driver’s side door hit the front right wheel of the fire truck.  The Forest Service truck, which was driven by Derek Solden, of Mariposa, lost control and ran off the highway.  It rolled four times and came to rest in a nearby field.

The Kia also lost control after hitting the fire engine, and overturned twice before it ended up on its roof.

All five firefighters in the vehicle were hurt.  Solden suffered serious injuries.  Lee Sands of Groveland, sustained moderate injuries.  Both were airlifted to Community Regional Medical Center, in Fresno.

The three other firefighters; Ben Jongerward, of Groveland, Ryan Baker, of Yosemite, and Brittany Dowden, of Madera, all had minor injuries.  They were taken to Saint Agnes Medical Center.

Constable sustained minor injuries and was not taken to the hospital.

Issues still remaining to be investigated include determining the speed of the vehicles, whether road conditions may have contributed to this accident, and whether the facts of this accident as reported are accurate.
If you would like these issues investigated further then please call Attorney John Rozier at 559-713-0159.  www.nelsonrozier.com