An update to the United States Forest Service fire truck collision that took place on Sunday, July 12, 2015.  The SUV accident occurred east of Clovis, on Highway 168, at about 7:30 AM.  All the firefighters hurt in the crash have been released from the hospital.

53 year old Maria E. Constable, of Fresno was driving a Kia Sorrento on Highway 168, when she attempted to pass the fire engine in the right lane.  As the SUV merged, it sideswiped the truck, with the driver’s side door hitting the front wheel of the other vehicle. 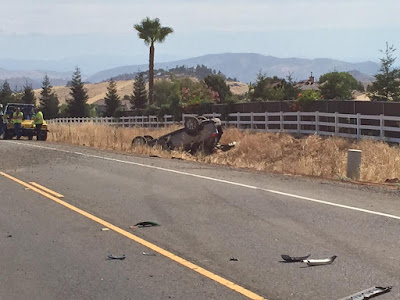 The U.S. Forest Service fire truck, driven by Derek Solden, of Mariposa, swerved off the freeway, and overturned multiple times, before coming to rest in a nearby field.

The Sport Utility Vehicle also rolled over and came to rest on the rooftop.

Fiver firefighters were in the truck.  All of them were injured.  Solden suffered major injuries, and passenger Lee Sands, of Groveland, moderate injuries.  They were taken by helicopter to Community Regional Medical Center, for treatment.

The other three firefighters; Ben Jongerward, Ryan Bakers, and Brittany Dowden, sustained minor injuries.  They were taken by ambulance to Saint Agnes Medical Center, in Fresno.

Constable was hurt, but did not go to the hospital.

The police report of this accident will be probably be ready in a week or two.  If you would like us to start investigating this accident–please call.  We can come to you. www.nelsonrozier.com or give me a call at 559-713-0159.  Attorney John Rozier of Visalia.
Read more here: http://www.fresnobee.com/news/local/article27375139.html#storylink=c