Skateboarder Seriously Injured After Collision With Semi Truck, in Bakersfield

Fresno, Visalia, Bakersfield Personal Injury Attorney John L. Rozier has the following accident report; On Thursday, June 25, 2015, a big rig collided with a skateboarder, in Kern County.  The semi truck collision happened in Bakersfield at around 12:53 PM.
Officers reported that the tractor-trailer crash occurred in the area of East California Avenue, and Union Avenue.  The skateboarder appears to be a teenager. 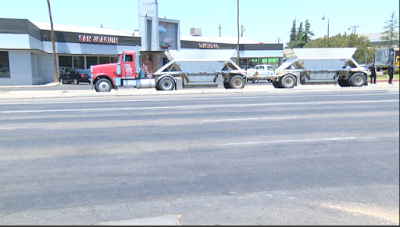 The teen was said to have suffered serious injuries and was taken to Kern Medical Center.  He was last listed as being in critical condition.
No other information is known at this time.
Please call us this afternoon to preserve evidence of this accident.  Mr. Rozier is here to help.  559-713-0159 or online at www.nelsonrozier.com.