Visalia, and Fresno Accident Attorney John Rozier has the subsequent collision report; On Sunday, June 28, 2015, four people were hurt in a rollover automobile crash.  The car accident took place near Prather, in Auberry, on Highway 168, at around 1 PM.
A gray Volkswagen vehicle, that had four teenagers, ages 17 and 18, inside, were headed west on Highway 168, in the Fresno County area.  The VW was reported to have been traveling at a high rate of speed, when the driver attempted to make it around a curve. 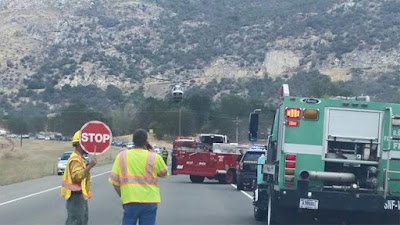 The auto veered into the eastbound lane, and the driver lost control after over-correcting.  The Volkswagen clipped a Honda Civic and went off the freeway.  The vehicle drove through fencing, and rolled over multiple times into a ravine, before it came to rest on its wheels.
The victims were trapped inside the car, until they could be rescued by emergency personnel.
Three of the four teenagers sustained major injuries.  The fourth person sustained moderate injuries.  One of the victims was medi-flighted to Community Regional Medical Center, in Fresno.  The other three were taken on the ground to Saint Agnes Medical Center, and CRMC.
The two occupants of the Civic were not harmed.
Issues still remaining to be investigated include determining the speed of the vehicle, whether road conditions may have contributed to this accident, and whether the facts of this accident as reported are accurate.
If you would like these issues investigated further then please call Mr. Rozier, your personal injury lawyer, at 559-713-0159 or reach us at www.nelsonrozier.com.