School Bus Accident on Truxtun Avenue in Bakersfield, One Killed

On Friday, May 1, 2015, a school bus, carrying eight children, and a car collided in Kern County.  The vehicle accident ended in fatality for one victim and left one other seriously hurt, in east Bakersfield, at about 2:36 PM.

A 1994 Acura, was driving west on East Truxtun Avenue, at reportedly a high rate of speed.  At the same time a Bakersfield City School District bus, driven by 72 year old Janet Foster, was headed east on Truxtun Avenue, about to turn north onto Gage Street.  The bus was carrying students home from College Heights Elementary School. 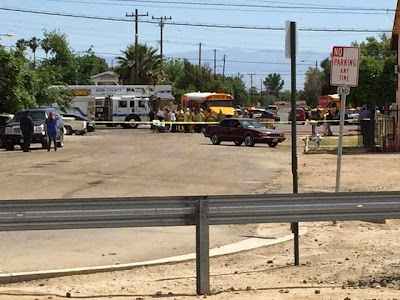 The school bus stopped for traffic and then pulled out into the intersection.  As Foster turned she noticed the Acura speeding towards the bus.  She hit the brakes, but was too late and the front of the bus collided with the left side of the Acura.

The automobile’s driver was not wearing a seat belt and was ejected from the car.  He died at the scene of the collision.  The passenger in the Acura suffered major injuries and was taken to the hospital for treatment.

Janet Foster and the children on the bus were not hurt in the accident.