Hit and Run Multi-Vehicle Crash on Divisadero Street, in Visalia

May 8, 2015- A three-vehicle collision ended in a hit-and-run in Visalia, on Friday.  The Tulare County multiple car accident occurred on Divisadero Street and Connelly Avenue, at approximately 4:05 PM.

A silver Mitsubishi, driven by Oliver Jackson, 24, was headed eastbound on Connelly Ave.  The automobile failed to stop at the posted stop sign.  As Jackson drove into the intersection at Divisadero Street, a Mustang, traveling south, smashed into it. 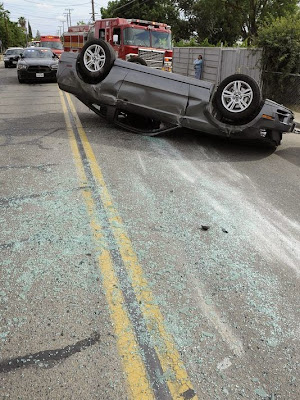 The Mustang then collided with a Toyota Tacoma, that was parked along the side of Divisadero St.  The car then overturned and came to rest on its roof.

Jackson fled the scene of the crash on foot, and was later found at his nearby home.  He was arrested for hit and run.  He was not hurt in the incident.

The driver of the Mustang and two passengers, which included a 2/3-year-old child, were injured.  The two passengers were taken by ambulance to Kaweah Delta Medical Center, in Visalia.

Please give me a call if you need legal representation or a consultation. Attorney John Rozier.  I specialize in personal injury cases that have resulted from vehicle accidents.  www.nelsonrozier.com or call us at 559-713-0159.My firm is located right in Visalia, on Caldwell Avenue.