January 28, 2015- A two semi truck collision caused chain reaction of accidents, in Fresno County, on Wednesday.  The big rig crash killed one driver and left others injured on Highway 41, at about 3 AM.

A Foster Farms poultry truck, carrying chickens, had pulled off to the side of Highway 41, on the northbound freeway, north of Central Avenue.  The driver of the big rig, from Livingston, was out of the cab, when a tanker truck, driven by Brandon Russell, 33, of Visalia. crashed into it. 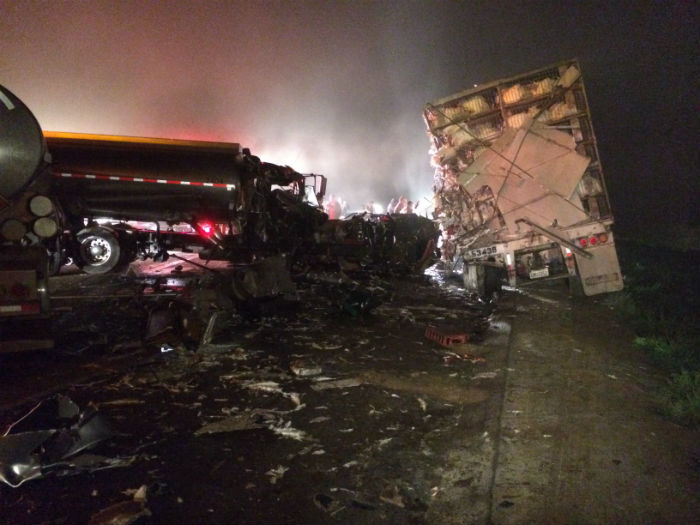 The driver of the poultry truck was pinned under one of the front tires of his vehicle, for about 40 minutes.  The impact caused the Foster Farms truck to jackknife.

A short time later a pickup truck, driven by Mario Moreno, of Riverdale, and then another Foster Farms truck, driven by Hoscar Rodriguez, of Fresno, both crashed into the first two tractor-trailers.

The driver of the first poultry truck suffered serious injuries.  He was taken to Community Regional Medical Center, in Fresno.  He later died at the hospital.

Russell sustained major injuries, but they are reported to not be life-threatening.  Moreno received minor injuries.  Both men were also taken to Community Regional for treatment.

The CHP reported that the foggy weather conditions were partly to blame for the collision.

The accident is under investigation.

Issues still remaining to be investigated include determining the speed of the big rig, whether road conditions may have contributed to this accident, and whether the facts of this accident as reported are accurate.  If you would like these issues investigated further then please call Attorney JohnRozier, your personal injury, and wrongful death lawyer, at 559-713-0159  or reach us at www.nelsonrozier.com.