Thursday, December 18, 2014, an automobile collision took place in Fresno County.  The fatal semi truck accident happened southwest of Selma, at about 11:30 AM.

Edwin Camp, of Kingsburg was driving a white Lexus east on Conejo Avenue.  At the intersection of Conejo and Fowler avenues the car ran the stop sign.  The Lexus smashed into a Chevron tanker truck that was carrying fuel.  The vehicle hit the cab of the big rig. 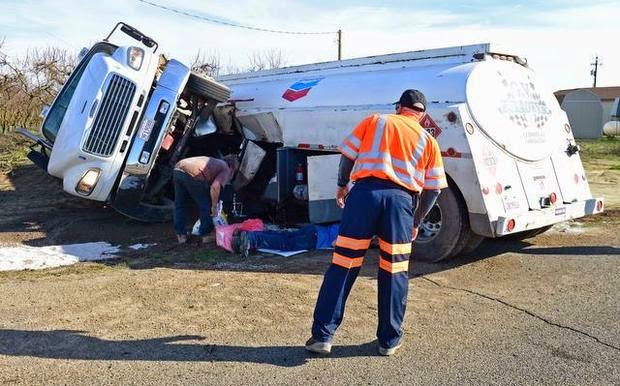 The tanker had been traveling north on Fowler Avenue when the car crashed into it.  The impact from the wreck sent both vehicles north down the street.  The tractor-trailer overturned and leaked diesel fuel, but no major problems occurred.

It is reported that Camp was not wearing his seat belt at the time of the incident.  Emergency personnel used the jaws of life to extract him from his car.  He sustained major injuries and was airlifted to Community Regional Medical Center, in Fresno.

Camp later died in the hospital from his injuries.

A passenger in the automobile and the driver of the semi were also hurt.  They were taken by ambulance to the hospital for treatment.

The scene of the collision should be independently inspected as soon as possible.  Please give me a call at 559-713-0159 or www.nelsonrozier.com.  John L. Rozier, Attorney at Law.  Your personal injury, and wrongful death lawyer for all automobile accidents.