November 22, 2014- A fiery automobile collision ended in fatality for a mother and daughter, in southeast Fresno.  The car accident happened on Saturday, at about 11:20 PM, at Chestnut and Jensen avenues.

Jacqueline Rivera was driving a Nissan Pathfinder, with her family, when she stopped at a red light, in the right lane of Chestnut Avenue, at East Jensen Avenue.

A Suzuki SUV, driven by Rafael Arce Pedroza, was traveling at a high rate of speed on Chestnut, and struck the Nissan from behind.  Pedroza then fled from the scene of the crash on foot. 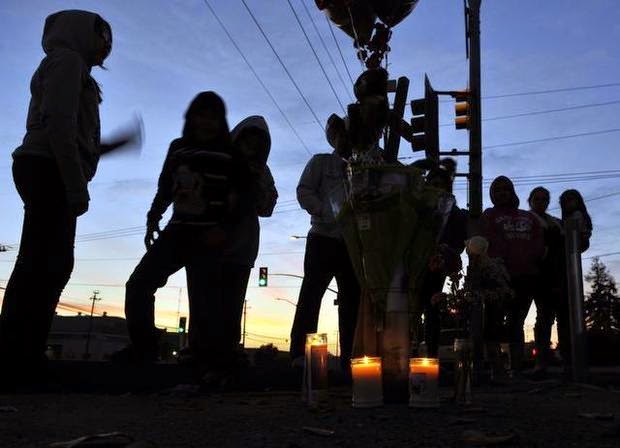 The impact of the collision caused the gas tank to rupture in the Pathfinder, and the vehicle burst into flames.  The vehicle was knocked into a light pole in the northeast corner of the intersection, after it flipped three times.

Jacqueline Rivera and her daughter, 11 year old Aaliyah Chavez, were knocked unconscious in the accident.  They were not able to save them from the vehicle in time and did not survive.

Investigators do not know at this time whether Rivera and Aaliyah died before the car caught fire, but they did not appear to be pinned in the vehicle.

Chavez, his son, and Ung, all sustained minor to moderate injuries and were taken to the hospital.

Pedroza was later found in his apartment hiding under his bed.  He suffered injuries in the collision as well and was taken to Community Regional Medical Center for treatment.  He was arrested on two charges of gross vehicular manslaughter, DUI, hit and run, and other charges.

While our condolences go out to the friends and family of the victims, we recognize that no monetary sum can ease the pain and loss felt after a tragedy such as this.However, just monetary compensation can help ease the burden of medical bills,final expenses, and help support any dependents left behind by the deceased.Please contact us at www.nelsonrozier.com or call Attorney John Rozier, at 559-713-0159, if you would like help filing a claim.