A Kenworth semi truck, driven by Alonso Hernandez of Los Angeles, slammed into a red, 2003 Kia Sephia sedan from behind, at the intersection of Manning Avenue and Fowler Avenue.  The tractor-trailer pushed the car through the intersection, and into a telephone pole. 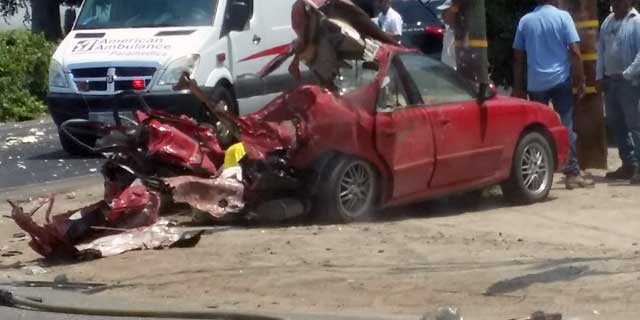 The big rig then hit another semi truck, driven by Julio Valenzuela, of Reedley, a short distance away, at Manning and Golden State Boulevard.  Hernandez then proceeded to leave the scene of the accident, and continued on to a gas station on Highway 99, and Manning Avenue.

Once at the gas station, Hernandez left his vehicle and fled on foot.  The California Highway Patrol arrested him a short while later.

Two people in the Kia; Leticia Trejo, and Ricardo Santos, of Selma, were pronounced dead at the scene of the crash.  Two others in the car; Renalda Santos, Efren Santos, and Valenzuela from the second big rig, were also injured and taken to Community Regional Medical Center, in Fresno.

Alonso Hernandez faces charges of driving under the influence, felony hit and run, and vehicular manslaughter.

If you would like this accident investigated further, please give me a call. Attorney John Rozier, your personal injury and wrongful death lawyer. I specialize in all types of vehicle accidents.  My office is located in Visalia, California, in Tulare County.  Let me help you. 559-713-0159 or online at www.nelsonrozier.com