April 12, 2014- A fatal car collision occurred on Highway 58 in Kern County, Saturday morning.  The accident happened at approximately 7:30 AM.

James Luschen, 40 years old, of North Las Vegas, Nevada, was driving a white 2006 Chevy Express van west on Highway 58, near Fairfax Road.  Luschen lost control of his vehicle as he tried to change lanes.  The Chevy crossed the median of the highway, into oncoming traffic, and crashed into a 1997 Chevrolet 3500 pickup truck, hauling a gardening trailer.  The truck was driven by Jhonadan or Yonadan Diaz Inga, of Bakersfield.

The van hit the left side of the truck, then rolled over the cab.  The impact threw Luschen out of the van, before the vehicle came to rest on an embankment on the south side of the highway. 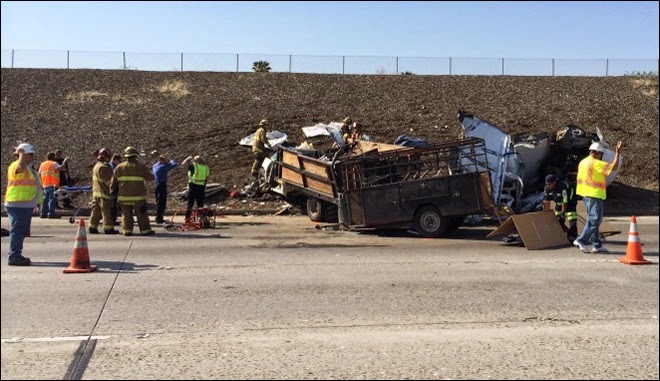 The cab of the pickup truck was crushed.

Luschen, and Inga were both pronounced dead at the scene of the crash.  Two passengers in the Chevy truck; Marino Tacza Inga, 20 years old, and William Bernardo-Zapaico, 27 years old, both from Boise Idaho, were also killed.

The CHP reported that they were unable to estimate the van’s speed at that time, but they did say there was a lot of force exchanged in the impact of the two vehicles.

Please call if you would like us to investigate this accident. The event data recorders with the airbag modules may have recorded the vehicle speeds. And we can look into whether there was any malfunction in the van.Our firm is located in Visalia on Caldwell Ave., in Tulare County, north of Kern County. Attorney John Rozier. 559-713-0159 or contact us onlinewww.nelsonrozier.com.