SUV Crashes Through Fence and Into Shed in Fresno

February 28, 2012- An SUV crashed into a yard and shed on Tuesday afternoon, in Fresno.

Police say they received a call of an SUV through a fence at Washington Avenue, near Barton Avenue. Minutes later, they got another call from a man claiming he’d been carjacked at gunpoint at Tulare Avenue and Backer; less than a mile away.

When they arrived at the crash site, they realized it was the same car, a white Ford Expedition, but the driver was gone. 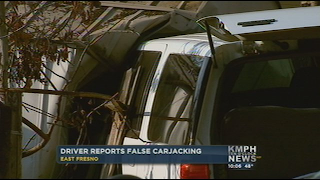 Search dogs were brought out to help find him.

It wasn’t until later that police discovered there was no carjacking. The owner of the vehicle just lost control, got scared and made up the story.