January 31, 2012- A stolen truck crashed into the fence of a police station in Merced. The accident happened Tuesday, at about 10:30 AM.

The Amtrak officer called the police dispatch for assistance. The Merced police saw Chestnut driving the Chevy south on K Street and attempted to pull him over.

Chestnut did not stop, but drove through the north end of McNamara Park, stopping once the truck collided with the fence at the police’s south sub-station. 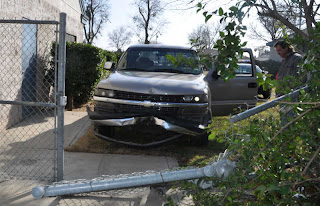 Chestnut started to flee the scene on foot, but stopped once officers told him to.

No reports on whether Chestnut sustained any injuries in the crash. He was arrested and taken to Merced County Jail.

If you need a lawyer please call Attorney John Rozier, your personal injury specialist handling all types of crashes. I am located in Visalia, south of Merced 559-713-0159.