The man was crossing the street at Academy Avenue and Parlier Avenue, when he was hit by a vehicle.

After being hit the first time, the man tried to get up and make it to the side, but he was struck by two other vehicles. 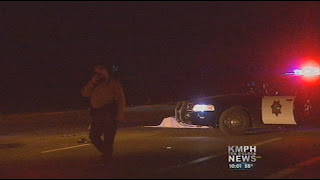 The pedestrian was pronounced dead at the scene of the crash.

It is reported that all three drivers stopped and tried to help the man after the accident.

Witnesses say that poor lighting in the area is to blame for the collision.