Car and Milk Truck Collision Kills One in Hanford

January 25, 2012- A fatal crash occurred in Hanford on Wednesday, west of Visalia. The accident happened at about 9:30 AM.

Ariel Marie Gieseman was driving a Nissan Sentra eastbound on Flint Avenue. With fog in the area, visibility was down to about 500 feet as Gieseman approached the Seventh Avenue intersection.

Dale Igou of Visalia, was driving a big rig carrying a tanker full of milk. He turned onto the road from a nearby dairy.

The semi almost completely entered the westbound lane on Flint Ave, when the Nissan slammed into the left-rear axle at a high rate of speed. The impact caused the Nissan to spin off onto an embankment. 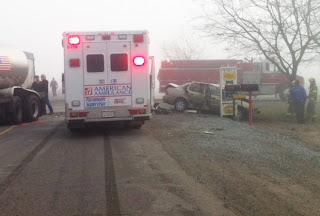 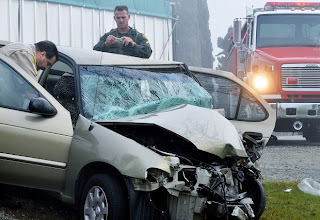 Witnesses said that the Nissan was going at about 60-70 miles per hour, and Gieseman was holding something in her hand just before she hit the big rig.

Gieseman was pronounced dead at the scene of the collision. No reports on whether Igou was hurt.

The crash is still under investigation, but fog was a big contributor to the incident.

Please give us a call, if you are a relative or are in touch with the family, and would like us to investigate this accident further. We are located in Visalia. Attorney John Rozier 559-713-0159.