Andres Walle Escamilla, 19, was driving his Mazda Miata north, just past Cairo Avenue. He tried to pass a slow moving vehicle, and merged into oncoming traffic. He slammed head-on into a Nissan Altima, driven by Susan Pulido, of Merced.

The Miata continued on in the southbound lane, after colliding with the Nissan, and then hit a Honda Civic, driven by Alejandro Tapia, before finally stopping. 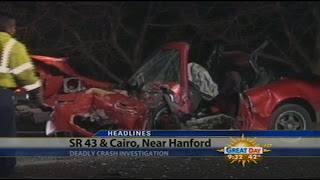 Escamilla was pronounced dead at the scene of the accident.

Pulido suffered major injuries. She was taken to Community Regional Medical Center, in Fresno for treatment.

Tapia was not injured in the collision.

The crash blocked traffic on the highway for over an hour before reopening.

Investigators are looking into how fast Escamilla was going and why he attempted to pass when other vehicles were in the southbound lane. The California Highway Patrol said that there was no fog, and the road was clear.

Drugs and alcohol are not considered to be factors in the crash.

I am a personal injury lawyer, in Visalia, just miles from Highway 43. Ready to meet all your legal needs. Please give me a call. Attorney John Rozier 559-713-0159.