The wheelchair bound man was crossing Blackstone Avenue, between Sierra and Herndon. He was not in a crosswalk while crossing, and it is reported that the lights in that part of the street were not clearly lit. 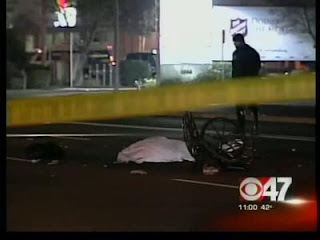 Both drivers did not stop after hitting the man. They now face charges of felony hit-and-run, even though the man in the wheelchair was at fault.

The man was pronounced dead at the scene of the crash.