Update: High Speed Chase on Highway 99 Ends in a Crash near Bakersfield

December 1, 2011-  A mother and her two kids were trapped inside a car during a high speed chase, that ended in a crash. The accident occurred on Highway 99 near Bakersfield, Thursday night.

LaJohn Richardson was driving his Cadillac, with passenger Sheila Early, and her sons’ Jeremiah and Terryion, and also her brother. As they were leaving Tulare to head home to Fresno, Richardson drove south onto Highway 99, instead of north.

A Kern County Sheriff’s deputy clocked the Cadillac at about 100 mph, and tried to pull him over. Deputies broke off the chase, but Richardson just kept going.

Richardson lost control of his vehicle and flipped several times on Hwy 99 near a dairy. 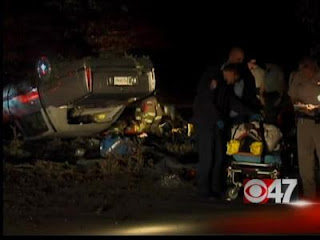 Early, her two boys, and her brother were also taken to the hospital for treatment.