December 12, 2011- An unknown driver of a stolen car, was seriously hurt in a crash in Bakersfield, Monday at about 1 PM. The accident happened near Shafter, on Magnolia Avenue, just north of Lerdo Highway.

The driver was behind the wheel of a green, 2000 Honda, when he lost control of the car. The Honda swerved into an almond orchard, and flipped several times through the trees. It is reported that the impact nearly split the dashboard in half.

The victim was pinned in the vehicle and had to be medi-flighted to Kern Medical Center for treatment. He is still in critical condition. 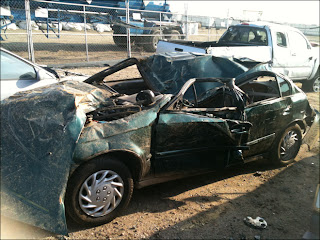 Officers reported that the car had been called in as stolen, and the man was not carrying any identification. At that time they could not fingerprint him, because he was so badly hurt.

The officers describe the victim as an Hispanic male in his early 20’s. Height about 5′ 7″ and weight 116 lbs.

Please give us a call, if you are a relative or are in touch with the family, and would like us to investigate this accident further. We are located in Visalia, north of Bakersfield. Attorney John Rozier 559-713-0159.