Pregnant Woman Trapped in Car After Crash near Bakersfield

The accident occurred between four vehicles along Comanche Road and Sunset Boulevard, just before 8 AM.

The CHP said the car ended up in different directions, so they didn’t know at that moment how the collision happened. They claim that the win and blowing dust were probably contributing factors for the incident. 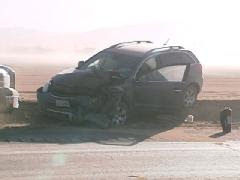 A pregnant woman was trapped in her car until crews could get her out. She was said to have minor injuries.

Two other people were also hurt. All three were taken to the hospital.