December 27, 2011- A Merced crash leaves one man dead and damages home, on Tuesday, just before 1:00 AM. The accident occurred at the intersection of University Drive and M Street.

Zachary Lemas, was driving a 2000 Chevy truck, with a 17 year-old passenger at reportedly a high rate of speed. They were traveling south on M Street.

The front of the Chevy slammed into the driver’s side of the Oldsmobile. The force of the crash spun the Oldsmobile into a street light pole, and then it crashed into a home on the street corner. 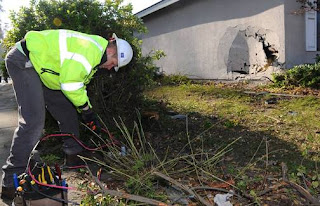 Part of the pole fell through the roof of the home. It is reported that the occupants in the house were not hurt.

Smith-Fuentz was pinned inside his vehicle, and had to be removed by fire crews. He was pronounced dead at the scene of the collision.

Lemas and his passenger received minor injuries and taken to the hospital.

The police said alcohol was not a factor in the accident, but that speed was definitely an issue.

Please give me a call if you need legal representation or a consultation. Attorney John Rozier 559-713-0159. My firm is located in Visalia, on Caldwell Ave, south of Merced.