December 1, 2011- Four people, including two children, were injured in a crash after a high speed chase, south of Bakersfield, Thursday at about 8 PM.

A vehicle, carrying two adults and two kids, was pursued by sheriff’s deputies. Speeds reached up to 90 mph. At one point deputies ended the pursuit, because they felt it was too dangerous.

The pursued car flew through the intersection of Bear Mountain Boulevard and Stine Road, where it became airborne, flying through several trees and then flipped over. 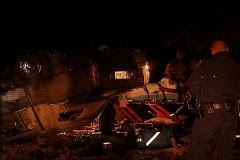 The driver suffered major injuries and was medi-flighted to Kern Medical center. The other occupants were also taken to the hospital. The extent of their injuries is unknown.

The driver of the car is being investigated for DUI.

If you need a lawyer please call Attorney John Rozier, your personal injury specialist handling all crashes. I am located in Visalia 559-713-0159