November 21, 2011- An update to the accident that happened Monday between a freight train and a dump truck, northwest of Goshen, within minutes of Visalia.

The MD Concrete Cutting & Demolition truck driver has been identified as Victor Valdez.

The crash also damaged the train tracks, besides the damage to the San Joaquin Railroad freight train’s damages.

Officials reported that the truck was heading south on Road 60 at about 55 mph as it approached the tracks. While the train was eastbound at about 20 mph on its way to Exeter. 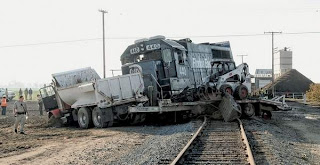 The train’s crew blew the horn as it approached the intersection. But Valdez claimed to have only seen the train at the last second.

Both vehicles tried to brake, but with the size of the vehicles they were not able to stop in time. Valdez swerved to the left, off the road, but with the truck’s speed, it still veered across the train tracks about 35 feet from the road, where the train slammed into the truck and trailer it was hauling. 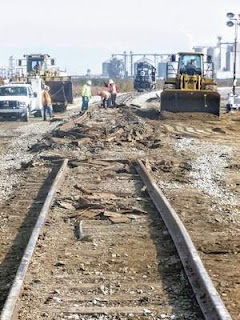 Valdez suffered major injuries. He was taken to Kaweah Delta Medical for treatment.

Another accident occurred at this same intersection in June. A woman, Debbie Felix, was killed when her car was hit by a train.

Our expert engineers stand ready to continue their investigation of this unsafe area. Please give us a call. We are located in Visalia just miles from the scene of the collision. Attorney John Rozier 559-713-0159.