Update: SUV Flips Over on Interstate 5 near Bakersfield

November 24, 2011- An update to the two people were killed in a crash on I-5 near Highway 223 outside Bakersfield, early Thursday morning.

The family of seven from Oxnard were traveling northbound on Interstate 5 when their SUV overturned and ended up in the southbound lanes.

The two people that were killed were ejected from the backseat. They have been identified as Daisy Alfaro, 17, and Jesus Alfaro, 23. Jesus Alfaro was Daisy’s uncle. 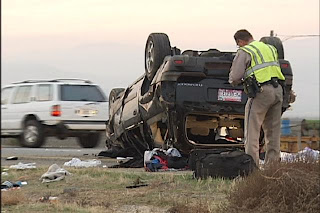 The five people that survived were two adults and three children, aged; 1, 3, and 13.

If you need legal counseling or representation for this accident, please give me a call. Attorney John Rozier, of Visalia, just miles from Bakersfield, 559-713-0159.