November 29, 2011- A driver was killed in a crash in Fresno, Tuesday morning on the westbound transition from Highway 168 to Highway 180. The accident happened at about 3:00 AM.

The driver, Jordan Stokes, was traveling in a 2006 Ford Escape, when he lost control of his vehicle. The Ford drifted off the highway, hit the center divide before Olive Avenue and struck a road sign.

The vehicle went airborne as it traveled over the overpass and crashed into a dirt embankment on the south side of the street, under the Highway 168 overpass. 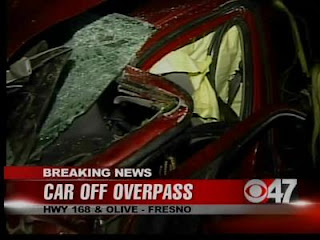 Stokes was thrown from his SUV. He received major injuries and was rushed to the hospital, where he later died.

The CHP are investigating the cause of the crash. They claim that fog was not a factor.

If you need a lawyer please call Attorney John Rozier, your personal injury specialist handling all types of crashes. I am located in Visalia, south of Fresno 559-713-0159.