November 28, 2011- An SUV and semi truck crash ends fatally, southwest of Bakersfield, on Monday at about 6:15 PM.

Bryan Christopher Osper, of El Cajon, was driving his SUV on Copus Road, just east of I-5. He was parked along the south shoulder of the roadway, when he then attempted to make a U-turn and drove right into the path of an oncoming big rig. The big rig broadsided the SUV. 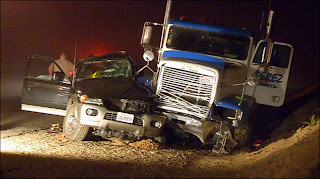 Osper was pronounced dead at the scene of the accident.

The semi truck driver, who was from Lamont, was not injured.

Please give us a call, if you are a relative or are in touch with the family, and would like us to investigate this accident further. We are located in Visalia, north of Bakersfield. Attorney John Rozier 559-713-0159.