Deputy Allan Scott Heathcott, a 13 year veteran of the sheriff’s office, was driving west on 7th Standard Road. Less than a mile west of the Highway 99 over crossing. While traveling westbound he slammed into a guard rail in the center divider.

The impact from the accident caused the metal portion of the guard rail to be impaled into the passenger side of the cabin. Heathcott was pinned in his vehicle for an hour and a half, before fire fighters were able to extricate him from the car. 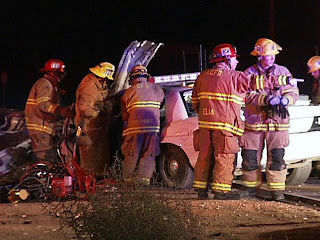 Heathcott suffered major injuries and was taken to Kern Medical Center to be treated for massive head trauma.

What caused the deputy to hit the guard rail is still unclear. The crash is under investigation.

I am a personal injury lawyer, in Visalia, just miles from Bakersfield. Ready to meet all your legal needs. Please give me a call. Attorney John Rozier 559-713-0159.