Transit Bus and Two Other Vehicles Crash on Highway 63

October 19 2011- An Orosi woman was seriously injured in a car crash involving a transit bus and two other vehicles Wednesday afternoon on Highway 63, just miles from Visalia.

A Tulare County Area Transit bus was traveling northbound on Highway 63, just south of Cutler. The Orosi woman was driving a Nissan west on Avenue 400, when she went through the stop sign at the intersection, right in front of the transit bus. 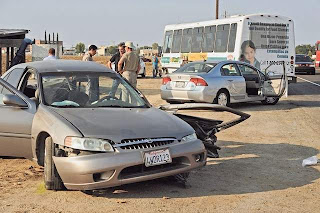 The bus hit the driver’s side of the Nissan, then swerved trying to avoid a southbound Plymouth Acclaim, which was also swerving to avoid the bus. The bus and car were unable to avoid the collision with one another.

Fire crews used the Jaws of Life to free the Orosi driver from her vehicle. She was flown to Community Regional Medical Center, in Fresno. And is said to be in critical condition. 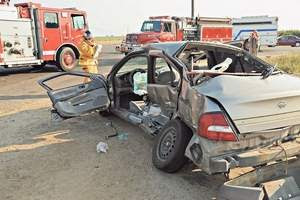 Three other people also suffered minor injuries and were taken to the hospital.

I am a personal injury lawyer, in Visalia, just miles from the accident. Ready to meet all your legal needs. Please give me a call. Attorney John Rozier 559-713-0159.