The Farmersville Police was pursuing a 2001 Honda Accord, reported stolen in Visalia. As they were following the stolen vehicle down Caldwell Avenue, the car crashed into an apartment building on Caldwell, at Court Street.

The driver was not injured in the crash, and was taken into police custody. 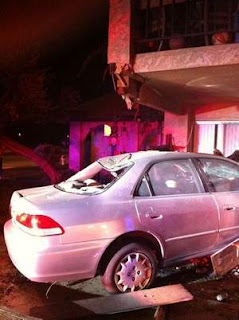 There were no injuries to the residents of the apartment building. Those living on the bottom floor will probably not be able to return to their apartment in the immediate future. It is also reported that the traffic light was knocked out as well.

Please give me a call if you need legal representation or a consultation. Attorney John Rozier 559-713-0159. My firm is located in Visalia, on Caldwell Ave, just miles from the accident.