Police Cruiser Crashes During a Pursuit in Clovis

October 25, 2011- A Clovis police officer and another driver were injured in a crash that involved a pursuit of another car, in the Fresno area. The accident happened just before 6 AM at the intersection of Shepherd Avenue and Willow Avenue.

Officers were chasing Michael Kaercher, who is accused of trying to break into his ex-girlfriend’s apartment. The ex-girlfriend has a restraining order against him, and a neighbor had called the police.

Kaercher was driving a gold or white colored Acura sedan, when he ran a red light. As the police cruiser was chasing Kaercher, the vehicle and a GMC truck crashed. 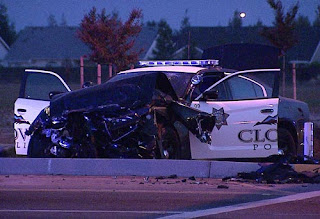 The suspect fled the scene, as all officers stopped to aid in the collision. Kaercher is still at large and said to be dangerous.

The officer and the driver of the truck received only minor injuries and were taken to the hospital.