October 16, 2011- Two people died Sunday afternoon on Friant Road in Fresno County after a motorcycle and car crashed. The accident occurred at about 2 PM near Willow Avenue.

The crash happened as a northbound red Cadillac sedan was making a left hand turn into a private driveway for a fruit stand and winery along Friant Road. The motorcyclist was riding at a high speed when he collided with the passenger side of the Cadillac.

The impact from the crash killed the motorcyclist who is said to be in his mid-20’s and the elderly woman who was the passenger in the car.

The driver of the Cadillac was taken to the hospital with unknown injuries. 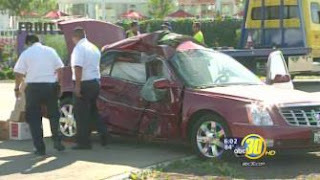 It is reported that the motorcyclist was wearing a helmet and the occupants in the car did have on their safety restraints.

The accident is under investigation to determine who was at fault.

Please give us a call, if you are a relative or are in touch with the family, and would like us to investigate this accident further. We are located in Visalia. Attorney John Rozier 559-713-0159.