October 10, 2011- a head-on collision on Highway 46 in Wasco, northwest of Bakersfield kills one and seriously injures another.

The crash happened at about 7:15 AM, when the driver of a car eastbound on the highway crossed lanes into the opposite direction of traffic and collided head-on with a big rig truck at Mc Kibben Road. 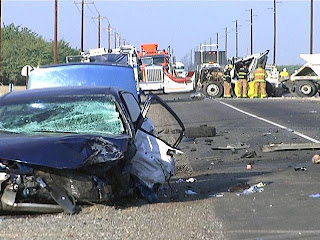 The impact from the crash caused the trailer of the semi, that was full of sand and gravel, to overturn onto the shoulder of the road. The force of the impact was so great that it crushed the cab of the big rig and killed the driver, 76-year-old Charles Edward Lawson. 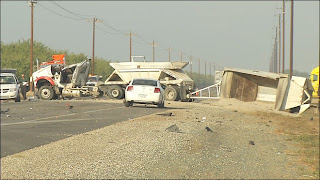 The driver of the car, Josue A. Hernandez was critically injured and airlifted to Kern Medical Center in Bakersfield.

It is reported that Hernandez was not trying to pass anyone. The CHP are now trying to figure out if he was possibly falling asleep at the wheel.