Deputy’s Car Crashes into a Canal near Los Banos

October 6, 2011- A Sheriff’s deputy from Merced County and his dog suffered minor injuries Thursday evening, while trying to avoid a crash with another vehicle near Los Banos, northwest of Fresno.

The man saw the deputy’s car, tried to slow down, but lost control of his vehicle and began swerving into the deputy’s lane. 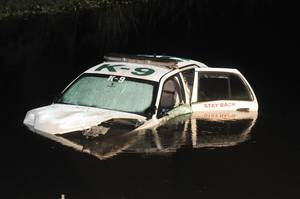 To avoid the collision, the deputy turned to the right, but lost control of the cruiser, and hit a power pole. The patrol car then went into a canal. He and the dog both escaped the water with only minor injuries.

The 19-year-old driver was said to be unharmed.