October 25, 2011- One person died in Fresno after a crash between two vehicles, on Tuesday at approximately 8:58 PM.

A 66 year-old man, driving a green Toyota Camry was southbound on Armstrong Avenue. A red Hyundai Sonata with a driver in his 60’s and a 50 year-old passenger, was traveling west on Jensen Avenue.

The driver of the Camry did not stop at the intersection’s stop sign, and slammed into the Hyundai. 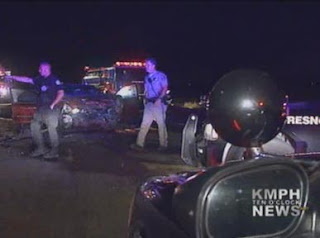 If you need legal counseling or representation for this accident, please give me a call. Attorney John Rozier, of Visalia, just south of Fresno, 559-713-0159.