October 3, 2011- A man died early Monday morning, when he collided with a police car in Fresno. The crash occurred at 2:51 AM.

The officer driving the police car was driving on Brawley Avenue, to the scene of a burglary in northwest Fresno.

The driver of a white 1987 Mazda 626 was making a U-turn into the path of the patrol car on Brawley, north of San Jose Avenue. The cruiser struck the Mazda broadside between the tires on the passenger side. 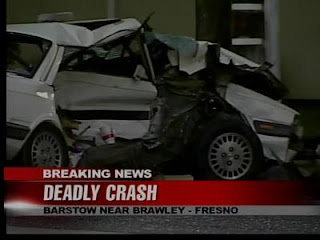 It is reported that the police vehicle was going between 40-50 mph. The cruiser hit with such force that it killed the driver of the Mazda.

The officer received minor injuries and was taken to Saint Agnes Medical Center.

Early reports indicate that the officer had the right of way.

Please call if you would like us to investigate this accident. The event data recorders with the airbag modules may have recorded the vehicle speeds. Our firm is located miles from the scene of this accident, in Visalia. Attorney John Rozier 559-713-0159