The crashes started at about 10:30 PM when a black Ford Ranger was seen going northbound in the southbound lanes. This caused other drivers to swerve out of the way.

The first crash happened at the Van Ness exit. The second near the 180 interchange, and the third accident happened near the McKinley exit. 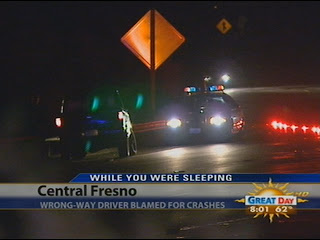 All three collisions were fairly minor, and only one person was taken to the hospital for injuries.

After the final crash the driver jumped out of his car and took off running. Officers eventually caught him near San Joaquin Memorial High School. He was arrested and now faces charges of hit-and-run, and DUI.

If you need a lawyer please call Attorney John Rozier, your personal injury specialist handling all types of crashes. I am located in Visalia 559-713-0159.