September 1, 2011- A Pontiac Grand Prix was involved in a crash on Road 124 north of Avenue 328, near Visalia, on Thursday. John Penner, of Visalia, the driver of the Pontiac, was arrested on suspicion of DUI after his car crashed into the back of a semi truck carrying a tractor. Both vehicles were driving south on Road 124, when the accident happened. 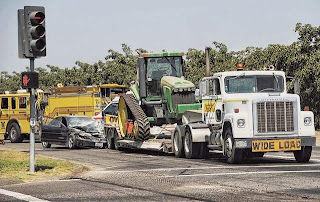