September 23, 2011- A motorcyclist died after his bike collided with a truck, north of Visalia on Friday at 2:05 PM.

Joe Mello, of Woodlake, was riding his 2004 Harley Davidson south on Road 168, north of Avenue 308, when a 1992 Ford F-150 driven by Jose Orozco, of Visalia, pulled out from the walnut orchards along the side of the road.

Orozco told officers that he stopped before entering the road but didn’t see Mello coming. He pulled out in front of him, leading to the crash. 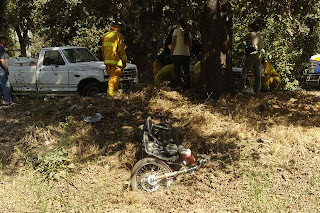 Mello was flown by helicopter to Community Regional Medical Center in Fresno, where he died from his injuries. Orozco was not hurt in the accident.

If you need legal counseling or representation for this accident, please give me a call. Attorney John Rozier, of Visalia, just miles from the scene of the collision, 559-713-0159.