September 26, 2011- An accident involving three vehicles ends in one fatality, on Highway 166 near Maricopa, southwest of Bakersfield.

Edward Leroy Jones, of Taft, was driving a blue Chevy truck on Hwy 166 after 9 AM. He pulled out of a turn-out at Cerro Noroeste Road. When he drove back onto the highway, he pulled into the path of an eastbound big rig truck.

The big rig, driven by Rick Peterson, was going 50 mph. Peterson had no time to stop, and crashed into the Chevrolet. The crash pushed both vehicles into the westbound lanes of the highway.

At that moment a propane truck, driven by Jose Orantes, was headed west on Hwy 166. Orantes was unable to avoid the two vehicles and hit them head-on. The propane truck was empty, but there were still enough fumes inside to immediately start a fire. 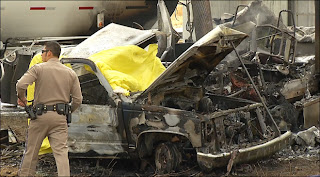 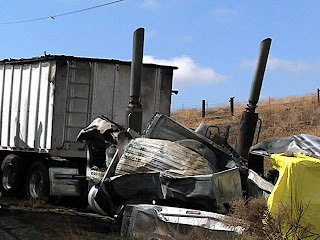 When the fire started both Peterson and Orantes jumped out of their big rigs and headed up a hill to try to get a safe distance from the flames. They both reported that they could not see Jones, the Chevy truck driver, because the truck was already covered in flames.

Kern County and Santa Barbara fire departments responded to the scene of the collision. After fire crews put out the fire they found Jones’ body inside his vehicle. A dog was also found dead in the truck.

Please give me a call if you need legal representation for this accident. Attorney John Rozier. I am a personal injury lawyer, and specialize in these types of accidents. Let our expert engineers take a look at the crash site for further analysis. My firm is located in Visalia, north of Bakersfield 559-713-0159.