September 12, 2011- A car ends up in a cornfield south of Visalia, Monday morning.

The motorist was driving his vehicle on Avenue 272, west of Mooney Boulevard, before noon on Monday. Reportedly he drove his car on the shoulder of the road and then overcorrected, and ended up in a cornfield. 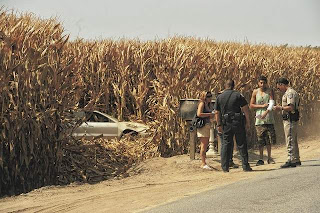 He received minor injuries, but refused an ambulance to be taken to the hospital. No one else was reported injured in the crash.