September 19, 2011- An Amtrak train carrying 163 passengers collided with a big rig near Ceres, in Stanislaus County, north of Fresno on Monday.

The driver of the semi truck, Rigoberto Jimenez of Delhi, was towing two trailers of tomatoes northbound, when the crash happened at Geer Road and Santa Fe Avenue, at about 1:35 PM.

The rear tomato trailer was blocking the Burlington Northern Santa Fe railroad tracks after the truck came to a stop. The train, piloted by Barbara Neu, of San Leandro, sped north toward the intersection at 80 mph. Neu saw the semi truck, slammed on the emergency brakes, and sounded the train’s air horns, but was unable to stop completely. 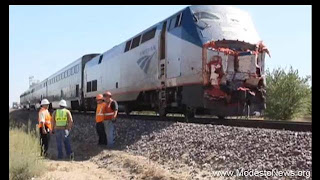 The train crashed into the rear trailer of the big rig, which then hit the right side of a Toyota Camry, driven by Maria Enes, of Hilmar, who was also stopped at the intersection.

It is reported that Jimenez did not see or hear the train coming. The railroad crossing bells, arms, and lights were functioning. At some point Jimenez figured out the train was about to hit him and was able to jump from the truck before the collision. 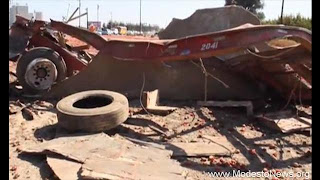 Initially nobody was injured from the accident, but later 20 passengers from the train complained of soreness and back and neck pain. They were taken by ambulance to Doctors Medical Center, and Memorial Medical Center, both in Modesto.

It is yet to be determined why Jimenez stopped on the tracks. It is possible that it was mechanical.