September 1, 2011- A Bakersfield school bus, on its way to Independence High School, was hit by a Ford Mustang, Thursday morning.

The bus was about to make a left hand turn at the intersection of Summer Springs Drive, and Harris Road. The driver of the Mustang was headed east on Harris Rd., but didn’t stop at the stop sign. When the driver realized the bus was in front of him, he slammed on the brakes but not in time.

The Mustang hit the left side of the bus. Both vehicles’ drivers and the six teenagers that were on the bus were not injured. 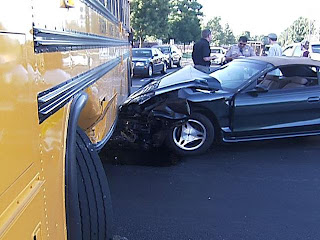 Police officials said the cause of the crash is under investigation.