August 9, 2011- A semi-truck flipped onto its side at about 6 this morning. Witnesses told the Highway Patrol that the big rig was moving about 15 mph when it suddenly lost control and turned on its side, as the driver was leaving eastbound Highway 180. The accident occurred at Blackstone Avenue, in Fresno. 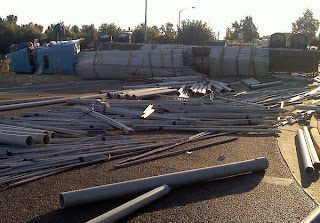 The driver told the CHP that he felt the load of piping he was carrying, shift on the trailer just before the crash. The accident will slow down the morning traffic for a few hours while workers collect all the piping, and clean up the diesel fuel that has spilt. 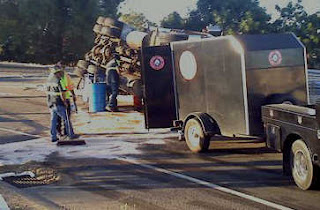 The driver was in his semi with his 3 kids and his wife. Several of the family were treated for minor injuries. No one was seriously hurt.