August 11, 2011- Shortly after 11 PM, a semi truck crashed through two backyards in a Southeast Fresno neighborhood. It happened as the driver was turning from California Avenue onto Sunnyside. Police said the driver lost control, smashing though a cinderblock fence and the two yards before coming to a stop.

No one was hurt in the crash, but there was extensive damage done to both backyards. Paul Hunt, one of the home owners, said that he was in shock, and wondered how such a thing could’ve happened. 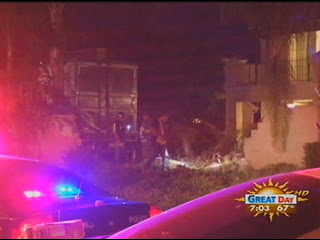 Police said that the big rig driver had a suspended license, and tried to flee the scene of the accident, but some neighbors stopped him. He was reportedly arrested for driving under the influence. He was taken to the hospital for a medical condition, not related to the accident.