Man from Visalia Drives Car off Bridge and into a Canal

August 21, 2011- A driver of a Toyota Corolla drove off a bridge, in Ivanhoe, and into a canal on Sunday at 6:15 PM. John Alvarado, of Visalia, and his passenger were unharmed by the crash. 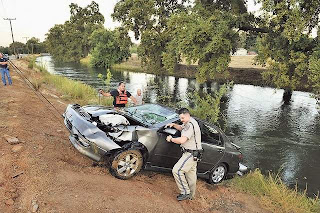 Alvarado was attempting to make a turn from Charter Oak Drive onto a small bridge at Road 180, but went into the water instead. A tow truck was able to remove the car from the canal after it floated about a quarter mile from where it had entered the water.

Alvarado was arrested by the CHP for driving under the influence.