August 11, 2011- Thursday morning a collision occurred between a Lexus and a big rig, southeast of Fresno. The crash left the driver of the Lexus pinned under the semi until rescue workers could get him out.

The semi truck driver told investigators that he was eastbound on North Avenue just before 9 AM, and had a green light at the intersection. The Lexus was going north on Clovis Avenue, reportedly at an estimated speed of 55 mph. He told the CHP that he saw the Lexus but could do nothing except brace himself for the impact. 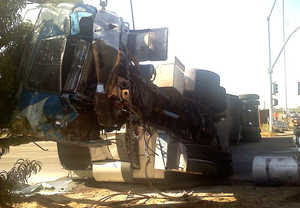 Witnesses of the accident agreed with the truck driver’s account, that the Lexus went through a red light and slammed into the side of the big rig. The impact of the collision knocked the front axle off the truck and pushed it out of the intersection.

It appears the truck driver was not injured. The driver of the Lexus was hospitalized. No word yet, on how severe his injuries are.

Before the vehicles are repaired or totaled, the air bag black box data can be retrieved to answer many questions about the accident. Please give us a call to get started. I am located in Visalia on Caldwell. Attorney John Rozier 559-713-0159. /