August 23, 2011- A semi truck carrying cars crashed Tuesday afternoon, on Highway 99. The crash left vehicles strewn on both sides of the freeway, in south Modesto. All the lanes of the freeway were shut down near the East Hatch Road overpass, after the crash occurred at 3:15 PM.

The accident happened when the big rig malfunctioned, hit a Toyota minivan, and then slammed into the Hatch Road overpass pillar. The driver of the semi, carrying cars on the back of a double-decker trailer, was traveling south on Hwy 99 when he lost control, after something went wrong with the rig. He smashed into the minivan and both vehicles careened into the center divide, taking out a section of the overpass support pillar. 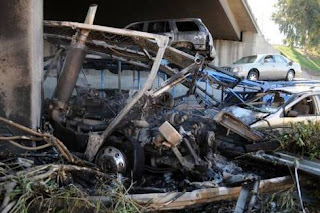 The big rig, ended up in the center divide of the freeway. Some time after the collision the truck caught fire, and the flames licked at the concrete before being extinguished. It is reported that the Department of Transportation officials were called to check on the stability of the overpass. 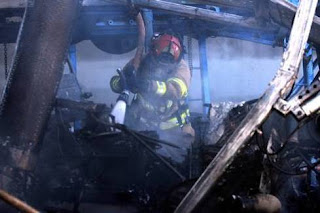 Three people were injured in the crash. The driver of the semi truck and his passenger, as well as the driver of the minivan, all suffered minor to moderate injuries. They were taken to a nearby hospital.

Because of the accident, traffic remained backed up on the highway, onramps, and side streets until about 5 PM, while the officers worked to clear the wreckage.

Please call if you would like us to investigate this accident. The event data recorders with the airbag modules may have recorded the vehicle speeds. And we can look into what caused the semi truck to malfunction. Our firm is located in Visalia, south of Modesto. Attorney John Rozier. 559-713-0159