August 13, 2011- Saturday afternoon, two big rigs sideswiped each other on eastbound Highway 58, west of State Route 202 in Tehachapi, which is about 40 minutes from Bakersfield.

The crash caused extensive damage to the trailers, which spilled more than 700 gallons of glue on to the highway from one of the rigs. The other rig was hauling produce.

The Kern County fire crews used sand and dirt to stop the liquid glue from moving further and to keep it from causing environmental damage to the area. 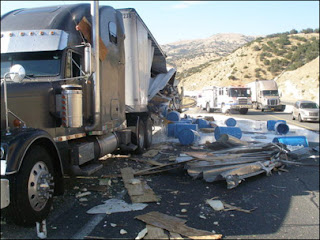 One of the semi truck drivers was injured and taken to a local hospital by ambulance.

Damage to both trailers is reportedly put at around $200,000. The cause of the accident is being investigated by the Highway Patrol.