Accident on Interstate 5 and Highway 43

August 5, 2011- More information has come in about the crash that occurred on the onramp of I-5 and Highway 43. A 61 year old woman, Maria Este Montejano De Magana, from Baldwin Park died when her Chevy Suburban that she was riding in blew a tire and flipped off I-5 north of Hwy 43. 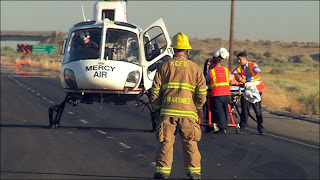 The CHP said, six other people, were in the van as well. A 5 yr old boy (name not released), was not injured. The driver Juvento Magana, plus a 38 year old woman and three teenagers, were taken to the area hospitals with major to minor injuries. 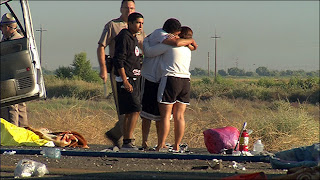 The Highway Patrol said, that the driver was driving north on Interstate 5 when the right, back tire and rim came off the Suburban. Magana lost control of the van and it overturned. The incident happened 6:18 a.m. on northbound Interstate 5, one and a half miles north of Highway 43.