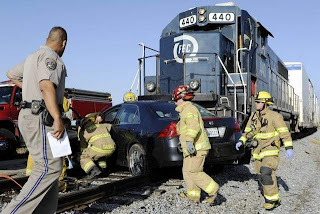 On June 6 a woman died after her car was hit by a train on Road 60 in Goshen in Tulare County. According to reports the woman was driving her Honda Accord southbound on Road 60 just north of Avenue 308 when she apparently did not see the oncoming train. Her car was hit on the passenger side and was pushed about 100 yards. Unfortunately, neither the driver nor her 6-year-old daughter were wearing seat belts at the time of the accident. The woman was pinned in the vehicle and was pronounced dead at the scene of the accident.The 6-year-old, however, survived and was treated for moderate injuries at Community Regional Medical Center in Fresno.